This fabulous resource just showed up in my Facebook feed today and wanted to share it with folks. Connie is regarded as one of the finest present-day exponents of Sliabh Luachra style of playing and his teaching has been at the heart of traditional music studies at University College Cork for nearly forty years. In his acknowledgements on the project, Connie states, “Composing tunes is one thing, but without a listening audience and a community of musicians to ‘adopt’ the tunes the practice of composing is pointless.” So, with those words in mind, please spend some time exploring his website / project via the link below.

The first thing that jumped out at me was that he had composed one of my favorite reels – Torn Jacket. I’ve been playing it for years and had no idea it was his composition. My guess is that Tes brought it back from one of her trips to Ireland and it snuck into our local repertoire. It was, I believe, one of the first reels that Sophie and I taught in our inaugural Session Class at BRIMS.

Personal note: I had the pleasure of meeting Connie on one of the BRIMS trips years ago in Ballyvourney when Sue Tansey and I took a fiddle lesson with him. Connie immediately sensed Sue’s passion for the fiddle, but had little hope for me. I say that with a good deal of respect for his opinion as he could tell I wasn’t playing fiddle much and let me know in no uncertain terms that my approach to learning fiddle would not work. He was kind about it, but clear. He was also right! My on again, off again relationship with the fiddle was not going to work in Trad and he wanted to make sure I knew that. He helped me understand that I had a decision to make – either find the passion for the fiddle or let it go. I can’t help but think of Connie whenever I see Trad musicians who are in that beginner/intermediate stage of learning. Do they (we) have that passion for their instrument and Irish Trad music or not? Because it really takes dedication to get to that next level of playing. To know the tunes and to be able to play them in the style they deserve. I’m still working on getting there, and, if you know me, it isn’t on fiddle. But it is still my favorite instrument to listen to, especially in the hands of people who have the passion to play it.

A few weeks back at the Paddy Keenan show, my friends Kevin Donleavy and Alex Davis were invited up on the stage to play a few tunes and they introduced the audience to a tune that Kevin wrote in honor of his friend, Jerry Crilly, whom Paddy also knew. Since Paddy has asked Kevin to send him a recording of the tune, it seemed like an interesting idea for a blog post, so I asked Kevin to provide a little background on Jerry and the tune. Here’s what he had to say:

“In the early 1970s, among the best-known ballad singers in Dublin town were Lenny Duff, Eric Fleming, and Jerry Crilly. They often performed together in venues like Slattery’s or Toner’s or the Labour Club. They hooked me on the poignancy and power of Irish trad music, both the songs and the tunes.

Among the songs that I learned from Jerry were such fine ballads as “Where Is Our James Connolly,” “The Streets of Derry,” “Avondale,” “Bridget O’Reilly,” “No-Man’s Land,” “Admiral Nelson” (written by fellow Dub, Joe Dolan), ” and “Only Our Rivers Run Free.” Jerry’s first wife Betty sang along as these fellas gave forth, and she was one to prod me whenever I missed a line or two; her favorites were “Avondale” and “Where is Our James Connolly.”

I wrote this jig in the early 2000s as a way to honor Jerry for his commitment to the music and for his kindnesses to me. Paddy Keenan and Jerry have known each other in Dublin from the 1970s. With luck, Paddy and others in Ireland and the States can help popularize this wee jig in honor Jerry Crilly.”

Jerry singing the ballad, “Blood Upon the Grass”

I had the rare opportunity to back renowned piper, Paddy Keenan, last weekend in Charlottesville. As I’m sure the 5 people who follow this blog know, he was a founding member of the Bothy Band, one of the Irish Trad Supergroups from a few years back now. Definitely one of the musical highlights of my life, and though I would have loved the opportunity to work with the tunes before playing it live in front of an audience, there is something wonderful about being in the moment with Irish trad music. Anyway, here are a couple of videos from the show and thanks again to Paddy for the opportunity to accompany him. 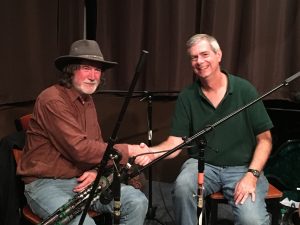 I should also add how much I’m enjoying my new backing instrument of choice – a fabulous bouzouki made by my friend Gil Draper of Knoxville, TN. I’ve been having such fun with it – thanks Gil!!